Construction of the INO340 Telescope

The main activities of the National Observatory project include designing, construction, monitoring and operating the 4.3-meter INO340 telescope, its instruments and infrastructures. The range of instruments initially planed for the telescope include a wave-front sensor, auto-guider, imaging CCDs and a high resolution spectrograph. Performing these tasks in the first place, is the responsibility of the management team and then it falls on different groups of the project, including the optics team, active optics, mechanics and the telescope control system. The infrastructure necessary for the successful operation of the telescope itself is an important part of the whole project which can usually consume a significant portion of the project’s time and budget. Part of the infrastructure for the INO project includes the service and coating building, INO’s dedicated 11.2 km road which connects Gargash summit to the national road network and the observer’s residence. 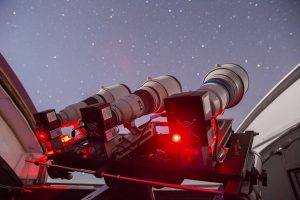 In addition to the professional team of designers and engineers who mainly focus on the INO340 telescope, the INO Technology Development Division is one of the most important sections of the INO Project which has played a major role in the design and implementation of the hardware and software infrastructures. With extensive research and innovative efforts, the group has had valuable achievements including the design and implementation of the automated seeing monitoring station (INO Auto DIMM). In addition, the team has successfully designed and implemented the INO Lens Array (INOLA) observing facility on the summit of Mount Gargash which is the first operational telescope of the INO Observatory. Both of these systems are remote controlled.

INO is a national project and has been envisioned to become an international scientific platform for astronomy in the future. Therefore, educating the general public and especially the younger generation about the basics of astronomy is another important step ahead of the INO project. An important focus of these activities are the residents close to the area around the the INO site whose lifestyles can directly affect the workflow of the INO observatory. So far, about 1,400 students from 22 schools in towns and villages close to Gargash site have been educated about the basics of astronomy and the effects of light pollution on the INO observatory. Furthermore, the project is using the social media to engage the general public with the project.